Like many Austinites, I have been anxiously awaiting the first Austin FC home game. And, given our role in bringing this professional soccer team to Austin, I was even more excited for June 19 to hurry and get here.

Thanks to Austin FC and Capital Metro, I knew I needed to figure out how best to get to/from the stadium. Inspired by The Striker, Violet Crown Soccer, Ben Wear and Rita Rear, I thought I’d log my experience on the MetroRapid 803.

We left our house in the Northwest Hills area at 6 p.m. We parked our car on a side street near Burnet Road and hopped on the bus at 6:15 p.m. It was running every 8-10 minutes. The bus was crowded with Austin FC fans. After we took this picture below, we were reminded to wear a face mask on the bus. 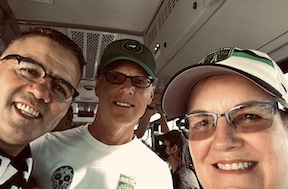 The bus driver dropped us off at the Stadium/Braker stop at 6:27 p.m. It was a short walk back across Braker to the stadium. After waiting in a short line for bag inspection and going through a metal detector, we were in at 6:39 p.m.

The stadium atmosphere and game were incredible, but that’s for another blog.

I had to wait for my husband and friend who were seated in a different section before heading to the bus. It was an easy walk out of the stadium and up Bright Verde Way. There were buses lined up and plenty of Capital Metro personnel helping direct.

We got on the bus at 10:19 p.m. The bus filled up quickly, and we were off (headed south bound on Burnet Road).

Many thanks to Capital Metro for the awesome ride, for free weekend rides until July 4 and to the Austin Police Department for traffic management.

Kathleen Smith is the chief financial officer at ECPR