WITH US: Developing a Mission, Brand and Life-Saving Message

People often ask “What is public relations?” and “What is branding?” and “Does it really matter?” Those are fair questions. In the human experience, how much can press releases or logos really make a difference?

Earlier this year, a momentous national center based at California Polytechnic State University (Cal Poly) launched with a bold mission: “To be a leading platform for innovative research and effective peer-led prevention and bystander intervention strategies, resources, and education. We support students and educators in ending high-risk substance misuse and all forms of campus-based violence.” 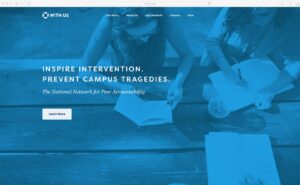 WITH US: The National Network for Peer Accountability is the culmination of the tragically preventable death by hazing-induced alcohol poisoning of 18-year-old Carson Starkey in 2008. This chilling accident inspired the national nonprofit Aware Awake Alive. Wyatt Brand — acquired earlier this year by ECPR — was the agency of record for four years until the nonprofit was acquired by Cal Poly. In that time, David and Rachel Wyatt, now branding experts with ECPR, became absorbed in the organization’s mission, brand and life-saving message.

Then, in 2016, we were asked to develop their operational framework plan, including key programs, their name and brand and their national positioning. It was an awesome responsibility. Preserving the legacy of clients who had become dear friends — while managing the needs of Cal Poly as part of the California State University profile — was an immensely substantive challenge.

The process took the better part of a year, largely because it involved paving the road along the way, so to speak. In essence, the process began with identifying priority operational and positioning goals for the university and the Starkey family. Then we delved into research of national nonprofits, as well as university-based centers and programs dealing with all manners of “bystander intervention.” This center was to innovate in the realms of not only alcohol poisoning prevention but also sexual assault, dating violence and all the disastrous outcomes of college binge drinking.

Our research and audit of what had worked with Aware Awake Alive led us not only to a compelling and unique message and brand, but to a four-part operational framework giving equal emphasis to outreach, research, resources and education for everything from staffing to fundraising and communications. This led us to some foundational programming concepts that could powerfully distinguish the mission, some of which are still to be announced.

What they have revealed from our work is that WITH US will become a massive online clearinghouse and resource center — not just for their own tools — but those of all professionals working in the bystander intervention field. Think iTunes for all manners of content and experts. We also envisioned a bystander intervention institute for student leaders, peer educators and prevention practitioners. There were digital programs and even physical, campus-based installations we conceived as part of our plan.

Everything from the descriptive text to the logo, (developed to resemble a life preserver with a nod to the operational pillars) was thoughtfully designed to be a catchy and newsworthy launch. The aim was to have deep purpose for the vast network of universities, parents, companies, and most importantly, young people we sought to embrace this brand as a movement.

So when you ask “What is public relations?” and “What is branding?” and “Does it really matter?” this sort of project comes to mind. PR and branding are not merely things that make people turn their heads momentarily. Our work here at ECPR is about identifying shared values and cultivating loyalty and trust with stakeholders. Everything we do has a strategy and insights to back it up, whether we’re leveraging media relations, video, digital platforms, branding, community engagement or crisis communications.

Perhaps most importantly to consider as the WITH US project launches is that your PR and your brand are essential components of your equity, your operations and how your company or organization interfaces with the world. For our part, we thrive in client relationships where we have open communication, boundless trust and access to the people that matter. Every day we have the privilege of growing companies, improving lives and making people’s interactions easier. And sometimes, we aim to help save lives.

Those are very meaningful days.

Special thanks to the Starkey family, Cal Poly’s Vice President for Student Affairs Keith B. Humphrey, and the team that made this possible: Sarah Rucker, Dasha Rakasovic, Rachael Craft, and ECPR Creative Director Rachel Wyatt.

David Wyatt is a director with Elizabeth Christian Public Relations.

PrevPreviousIs It Time to Take a Closer Look at Your Brand?
NextWin Two Free Tickets to the Opening Night of Leonard Bernstein’s MASSNext